It’s fairly frequent among people who have started to get interested in anime enough to start knowing things about the people who make it find themselves encountering the names of certain directors and studios over and over. Kasai Kenichi excels at college life stories. Hiroshi Nagahama was the bold visionary who directed Mushishi. Perhaps one of the more preeminent studios in that regard are Madhouse and Gonzo, the studios behind Death Note and Gankutsou, respectively. They can flash those series names on “from the studio that brought you” title cards of the trailer for anything else they make, despite the fact that Madhouse made the Marvel anime and Gonzo hasn’t been run by the people who made Gankutsuou since 2008. I’m here to make the case for why Madhouse’s reputation, along with a number of others, may be a bit overblown. It’s not that they’re not making awesome anime, but they are picking source material that gives them a lot of help.

This situation with directors can sometimes be a bit like that of the quarterback in American football; they get too much credit when things go well, and too much blame when things go wrong. In reality, lots of factors beyond the men at the top contribute to an anime’s success. I’m here today to take a look at one in particular; the pre-production choice of high-quality of source material. What follows is a look at anime adaptations of Shogakukan/Kodansha Award-Winning manga, including observations based on both their relative frequency over the years, their strength as a function of which studio makes them, and their performance in the marketplace.

I should start by admitting that I came into this blog with a bias; I tend to think that which animation studio is working on a project is less important than the director in charge. Within one week of opening the blog doors, I had pulled some data on the resumes of various prominent animation studios and directors from the 2009-2012 period to test that assumption. The results turned out to be a lot more inconclusive than I would have thought; studios and directors alike split various categories, and some were consistent while others were not. It was the kind of study that left me wanting another way to attack the problem. This time, I’m looking at the same question of studio and director relevance from a different angle (and armed with a wider-ranging database).

Before we get started analyzing the data, let’s take a brief look at the Shogakukan and Kodansha Manga Awards (hereafter SMA and KMA, respectively). These awards are essentially yearly prizes handed out by major publishing houses, decided on by a panel of expert judges, and handed out to an author (or authors, in the event of a tie) for a particularly excellent series in either shonen, shojo, kids, or general manga. In addition to further legitimizing the untouchable greatness of Osamu Tezuka,* these awards are fairly excellent barometers of manga quality. Take a look at the murderer’s row that won the last 3 years in the SMA general category: I Am a Hero (2012), Sakamichi no Apollon (2011), tie between Ushijima the Loan Shark and Space Brothers (2010). In those same 3 years, the KMAs were honoring Vinland Saga (2012), Giant Killing (2011), and both Space Brothers and Sangatsu no Lion (2010). It’s not just gritty adult stuff that wins. Past notable champions include Nana, Kekkaishi, Cross Game, Life, Nodame Cantabile, Hajime no Ippo, and Fullmetal Alchemist.

Short version: winning the KMA/SMA is a fairly accurate barometer of a manga’s level of quality. And that’s very relevant for understanding who the biggest contributors are when anime turns out amazing. You see, unlike adaptations of novels or original screenplays, adaptations of manga come from an inherently visual format, with a pre-rendered storyboard for the anime staff to work off of. Unless the staff wants to scrap it and start from scratch (something exponentially less likely the more popular a source manga is), then a lot of the most important parts of visual presentation (i.e. the chief jobs of directors and animators) has already been done. Thus, the effort those people need to put in is a lot less intensive making a novel adaptation (such as the Monogatari Series) or an original anime (such as Cowboy Bebop**). It only really takes a C+ talent and work to make an A anime out of an A+ manga. At least, that’s my initial thesis here.

With all that in mind, I pulled a list of every SMA/KMA winner to get an anime adaptation since 2005, the starting point of my dataset, and logged their studio and director.

To get a rough idea of the director’s skill level, I noted the number of prior TV/Movie/Long OVA directing jobs s/he had held prior to handling the anime in question. If director skill makes a difference in esteem, we should be seeing those by more experienced directors get a more positive (i.e. closer to #1) myanimelist ranking.

So what do we see? Plotted below are the results, with both ranking and popularity compared to director experience. 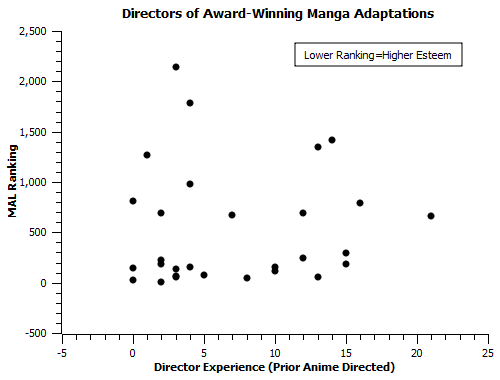 Both of these variables have a correlation coefficient of less than .1, basically as unrelated as can be. Even before that, they don’t really pass the eye test for two variables that should be fairly correlated; I highly doubt expanding the sample size back 10 or even 20 years would give you a line of best fit that slanted in either direction. Comparing a director’s experience with both popularity and esteem leads to a relationship that is inconclusive at best and chocolate ice cream on a white sidewalk at worst.

More interesting were the sales of the various adaptations, which does seem to follow something of a trend (recall that a typical anime needs 3000 per volume sales to be considered a success, and 10,000+ is considered a hit). 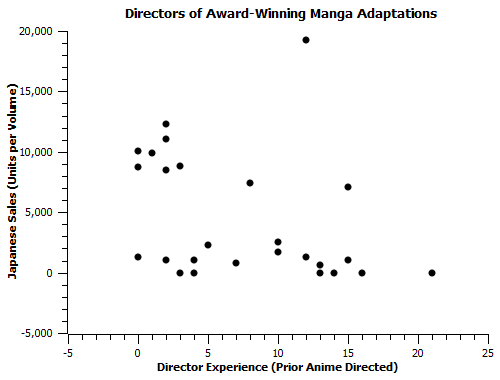 Two things pop out at me from that graph. First, the distribution of sales figures for these adaptations is highly bimodal; either they’re producing explosively at levels of 6000 or above, or failing to turn a profit at less than 3000. Not a lot of KMA/SMA adaptations occupying the margins/middle ground. My best guess as to why that is that KMA/SMA material may, on average, target people who watch anime less often, so their sales are truly more dependent on getting their message out. This meshes with the fact that the average sales for KMA/SMA adaptations from 2005-2008 (when noitaminA was in its prime pulling 3-4% ratings) was ~4700 per volume, but only only ~2800 from 2009-2012 (when the timeslot declined in ratings after making a transition from adult-life stories to experimental and otaku-oriented fare in 2010). A quick caveat, this data sample stops at Fall 2012, so Attack on Titan doesn’t factor in. If it did, we’d have another on the hit side of the bimodal distribution (to the tune of about 40,000 per volume) that would push up that newer average up quite a bit. That’s a small caveat, though, because you’re not going to crack the top-20 in all-time per volume sales very often no matter what you do.

Second, most of the more profitable adaptations were produced by comparatively greener directors. This is somewhat contrary to my expectations. My pet theory as to why is that happens involves how the directors choose their jobs. Young directors are after both career advancement and a better salary, and taking jobs with a good chance of being profitable plays into that. In contrast, once a director has built up a reputation, they care less about pleasing any particular audience and have the clout and the guaranteed salary to take on riskier projects. I call it the Younger Hunger Theory. I’d like to highlight that the above was an unsubstantiated theory, but it is testable. Take 10 or so directors who only started working after 2005, and track their sales numbers over the course of their careers. If they go through a phase that values profits and or a phase that takes risks, it should show up on those curves. I’m tabling that analysis, but it might be worth coming back to in the future.

For studios, I was looking for those that produced multiple adaptations of KMA/SMA manga, so I could compare their averages. If Madhouse were actually significantly better at making adaptations than, say, a perennial lazybones like Toei, their works should post a measurably better myanimelist ranking, on average. Well, there were 5 studios to make multiple adaptations of KMA/SMA winners over that span. Here are their averages (remember, lower is better):

Factoring in errors, these are pretty close to even. That doesn’t mean there’s not a difference in the degree of effort each studio puts into an adaptation, just that it doesn’t manifest itself in the scores people give significantly enough to pop out of this admittedly small sample. Even for studios like Toei and Madhouse with vastly differing reputations. It’s worth noting, though, that every one of these scores significantly beats out the average ranking for any season on record; they’re all earning positive assessments. But one isn’t doing so appreciably more than another.

When Ace of the Diamond comes out this fall to the level of praise it will inevitably get, a lot of people doing the praising will point to the show as another triumph of Madhouse. This is a half-truth; Madhouse deserves credit for making the anime a reality, but the degree of difficulty involved in producing a good product out of something that already won both the Kodansha and Shogakukan manga awards, a feat matched only by Space Brothers and 20th Century Boys in the past 15 years, is far less than one might expect.

I’m not trying to sandblast Madhouse here; I happen to like a lot of their stuff, and you can’t deny that going into the red for Redline or financing Masaki Yuasa again after Kaiba bombed were incredibly gutsy moves. But they don’t get 100% of the credit for everything they’ve ever done. A more egregious example, where someone did get 100% of the credit for something that wasn’t just him, occurred during the non-debate over Aku no Hana that cracked open this Spring. One of the key arguments in favor of the show as high art was that of Hiroshi Nagahama’s resume. Despite his relative lack of one, I saw people pointing over and over to Mushishi as evidence that he clearly had his head together. If you actually compare the two media, and look at what was done visually in Mushishi, you’ll find an adaptation of an excellent manga that copies said manga nearly panel-for-panel. The biggest contributions the anime made were the soundtrack and audio handling (the province of composer Toshio Masuda and sound director Kazuya Tanaka) and color schemes (which he does deserve some credit for). The reality is that we just don’t know that much about a director after just one or two anime. Especially when one of those anime is being hoisted on the shoulders of one of the more amazing manga of the decade.

*In 1957, Osamu Tezuka tied himself for the SMA. 20 years later 1977, he tied himself for the very first KMA. If I had to list the top 5 most unbreakable records in manga, that would be up there with Shotaro Ishinomori’s Guinness for 128,000 pages of published comics. One reason for that is that people don’t produce volume that anymore, even the authors who do do multiple series. Another is that the talent pool is a lot broader now; more authors writing more manga means that any one has a lesser chance of winning.

**Even if Cowboy Bebop did steal like a Lupin from Crusher Joe.

1 thought on “Fun With Numbers: Adaptations of Award-Winning Manga and the Myth of Madhouse”