I’m about to dive headfirst into the manga/LN print data I’ve gathered and check how much the series that got adaptations benefited from them. It’ll take a week or so, but when I’m done, I’ll have charts like the 2011–2012 ones and a wealth of organized first-two-weeks data to cross-reference with the casual-indicators checks I’ve been doing, and I should be able to more or less finish that project. Before I do that, though, I just want to outline some guidelines I’ll be using for said project before actually gathering the 2013 print data.

One of the key problems I bumped into early on was how to classify boosts as big/small/significant/what have you. It’s a complicated issue that in practice goes far beyond the Oricon charts, but for the purposes of this project, I’m going to focus primarily on chart-visible boosts. These get split into two categories; one, the type where a series makes the charts for the first time post anime, and two, the type where a series sees a sharp uptick in post-release sales. After looking into the previous year’s record, I decided on different criteria for each.

I’m going to consider first-time charting significant if a previous volume was released under a threshold that would not have prevented the first-time-on-charts total from charting. In other words, most series charting for the first time will make this cut, but it’ll disqualify series like Freezing that charted under these ridiculously friendly circumstances: 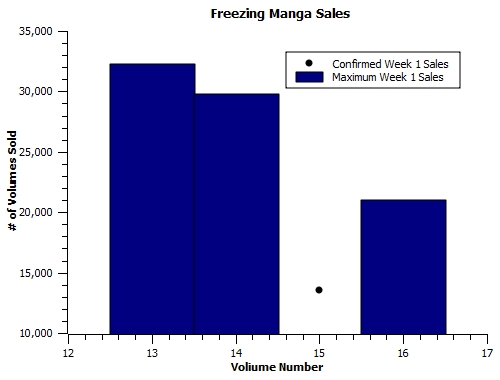 I’ll consider boosts for series consistently on the charts significant if a series sees a 20% uptick in first two weeks of release sales from the immediate pre-anime period to the immediate post-anime period (averaged over 2 volumes, if possible). Even if the effects of anime adaptations extend well beyond this limited scope, I hope this will at least be indicative of which series made the very best of their source material boosts.

Also, I’m going to avoid analyzing series that lack post-anime releases (Servant x Service) or pre-anime releases (High Speed). For obvious reasons, both before and after data are necessary to identify a boost.