Despite the fact that both get released in compiled volumes costing somewhere between 400 and 1000 yen a few times a year, the market for manga differs in many ways from the market for light novels. For one thing, it’s a much smaller scale market; the most popular light novels sell hundreds of thousands of copies immediately after their release, rather the millions that One Piece/Fairy Tail/Attack on Titan bring in. Too, light novel adaptations tend to succeed much more as a function of their initial popularity than manga does. To get an in-depth look at how anime adaptations of light novels have impacted the source material, I’ve plotted the sales for their first two weeks of solicitation over time, with the airdate of the anime superimposed. See this doc for the raw data, and compare the 2011 data for manga adaptations.

Note: I plot the two-week totals, rather than the one-week total, because even the average the first week total is vulnerable to a series that comes out on the last of the Oricon tracking period and having its sales numbers hamstrung. Kore wa Zombie Desu Ka had 4 volumes in a row come out on the last day of the week, obscuring a very real anime-fueled boost in sales. 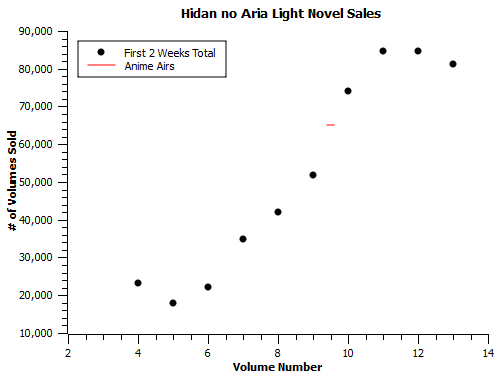 Horizon on the Middle of Nowhere 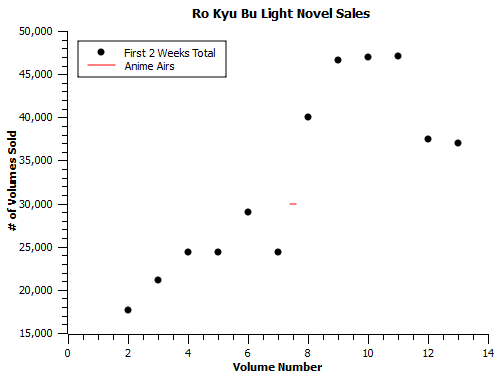 -Novels for which I could confirm a change in sales averaged about 20,000 additional copies per volume in the wake of an anime. Every running series except R-15 (never charted), Dragon Crisis, and Itsuka Tenma no Kuro Usagi got a boost of around 5000. This is, perhaps somewhat surprisingly, a greater percentage of series to get something than manga produced over the 2011-2012 period, where roughly half of the sample of adaptations produced an increase in volume sales very close to zero.

-That 20,000 per volume boost means that, if you’re going to run an LN for 4 more volumes after the anime, you could make a gross profit of about 48 million yen. That’s a third of a 12-10 episode anime budget right there, disregarding the means by which profits are divided. And these are deliberate underestimates; LNs remain on sale for longer than 14 days.

-Horizon on the Middle of Nowhere’s boost took a bit longer to show than most, but that’s likely because its readers had significantly thicker books to power through. This case may be similar in principle to how 20-year-old JJBA was the one series to not see any manga sales increases in 2011 and 2012 in spite of both a high mal ranking and megahit disk sales.

-Dragon Crisis, a series that never topped 10,000 in volume sales, getting an anime one volume before the end seems almost like a sackable mistake; there’s almost none of the aforementioned novel upside, and poorly selling light novels tend to make for poorly selling anime. Though this is not always the case; more on the successes of Captains Katou and Sato in the 2012 data.

4 thoughts on “Fun With Numbers: Anime as Light Novel Advertisments in 2011”