In the past several weeks, Ohayocon-induced hiatus aside,* I’ve been compiling the sales data of light novels that became anime in 2011 and 2012. Put bluntly, the ecosystem of initial print sales->anime sales->additional print sales is very, very different from manga. With manga, it was very often the case that a comparatively unpopular manga like Blue Exorcist could produce the anime sales of a superhit while a way more popular manga like Sukitte Ii Nayo could produce anime sales all too close to nonexistent. Additionally, poor-selling anime like Kamisama Dolls and Zetsuen no Tempest often led to big surges in manga sales while popular anime like Yuruyuri produced negligible manga gains.

To recap something I touched on here, Pearson correlation coefficient is a number between -1 and 1 that indicates a stronger correlation the further it is from zero.

Let’s examine that relationship in a little more detail. Popular Light Novels (arbitrarily defined here as novels that had at least one 2-week period in which they sold over 15000 volumes prior to the anime) accounted for every LN-anime to average over 4000 disks sold per volume except Cap’ns Katou and Satou’s Glorious Space Piracy Joyride. This leads to a Pearson correlation coefficient of pre-anime LN sales and anime sales of 0.68, indicating a fairly strong relation. According to a linear fit of the data, after 15000 volumes, every 100 LNs added to the pre-anime peak is worth about 70 additional disks per volume sold. With the understanding that there’s scatter and most series do better or worse than average, of course.

And once an anime becomes popular for the same reason its source material was, you can generally count on LN sales to ride what could be considered their own coattails and rise significantly. Save for anvil substitute Horizon on the Middle of Nowhere, every anime-LN adaptations that averaged over 10,000 disks sold added 20,000 or more to the sales average of its respective LN franchise. The Pearson correlation coefficient anime sales average and increase in LN sales averaged over the 4 volumes nearest the anime (2 before and 2 after) is an even stronger 0.74. According to a linear fit, every 100 anime disks sold will correspond to 170 additional light novels sold per volume.

When I was looking at manga sales gained, I happened to notice that a series’ rank on myanimelist happened to correspond fairly well with gains in manga sales. Though comparing myanimelist ranking does produce a stronger correlation coefficient with print gains (-0.4, as opposed to -0.25), compared with a manga sample where the series that got big gains were almost exclusively in the top 1000, the sample is a bit less visually striking.

What is visually striking is the correlation of LN sales gained with myanimelist popularity. Here, the 3 LNs that got the biggest gains all got them from anime in the top 200, and no LN with an adaptation in the top 200 gained less than an average of 20,000 volumes. Couple that with a steeper linear fit on average. The correlation coefficient for LN print sales gained and mal popularity is -.64, compared with -.23 for manga print sales. 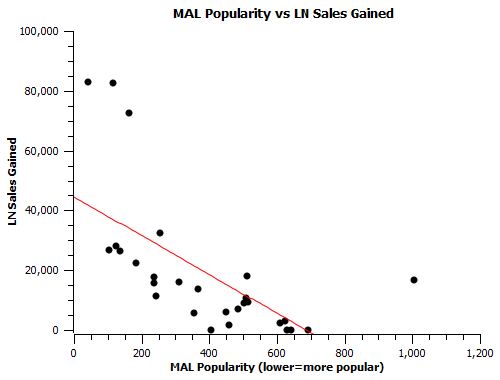 My pet theory/explanation for this discrepancy in the importance of popularity between media is this; the type of people who would never buy light novels anyway are bringing the ranks of the anime down, but light novels are niche enough that they don’t need mainstream approval. Perhaps the series are still reaching the people they want to reach, doing so in appreciable large numbers.

One other interesting thread arises out of the conclusion. I have 60 manga adaptations on record over these two years, compared to only 37 LN adaptations. If light novel adaptations, especially those of popular series, produce better-selling anime more reliably than manga, why do we see fewer adaptations of them of them than we do of manga?

The likely answer comes from the fact that anime in general don’t just profit from selling disks. They’re also often made to promote their source material, and the fanbase for manga in Japan is significantly larger than the fanbase for light novels in Japan. Consider that the highest-selling light novel used in this sample, Sword Art Online, was selling ~200,000 new volumes in a 2 week period after getting its anime bump, and compare that with the fact that that there are at least 3 manga (One Piece, Fairy Tail, Attack on Titan) that can sell one million copies in an equivalent frame of time. And mix in the fact that the last one of that group of three is on there at least in part thanks to its anime. Despite the apparent overlap of those who buy anime with those who buy light novels, the print sales upside of manga adaptations is a huge point in their favor.

It’s possible that LN consumers are more likely than manga consumers to backbuy every volume, which would raise that total a bit for long-running series, but there’s not a ton of numerical justification for low-selling light novels getting adaptations.** If the industry hits another wall like it did in 2008, adaptations of these types of series might be finding their way to the pre-production chopping block considerably more often, perhaps with budget refocused into developing younger writing talent.

*Aside from the panel on noitaminA that some genius scheduled for 1:30 AM which predictably got zero attendees, the con was generally excellent. I’d like to think that people walked a away with a little more understanding of the gears that make up the anime/manga machine.

**This is one of the reasons why I would totally take pick ’em odds on the upcoming Amagi Brilliant Park adaptation averaging less than 3000 disks per volume. The arguments for it are Kyoto Animation’s buy-anything base, a fictitious construct of people who only bother to pay attention to figures that support their cause and ignore the fact that Munto did badly enough to join the illustrious ranks of shows never to make the oricon charts, and the fact that it’s being made by the creator of Full Metal Panic, an argument that holds up until you realize that Golden Time is from the creator of Toradora (which sold considerably better as an anime than FMP) and sold moderately worse this August than Golden Time did this April. The arguments against Amagi are the fact that the top reviews of its first two volumes on amazon are ones that rate them 2 stars out of 5, and the fact that the only LN adaptation to overcome sales figures at or below Amagi’s level and be successful in these two years is the aforementioned Bodacious Space Pirates. In more general terms, breaking 3k is something the majority of anime series do not do; Tamako Market’s ~3600 disk average was in the 70th percentile of anime sold from 2005-2012.

Purely going by LNs that peaked at Amagi’s current level or below in these two years, the odds of it breaking 3k are 1 in 7. Even if you think Kyoto Animation triples those odds of success, that’s still 2 to 1 against. Hardly impossible, but definitely an uphill battle.