It’s one of the oldest conundrums in the anime fandom that the shows that get the most attention are often not the best-made shows, the ones that blow people’s minds when they see them. In a vaccum, that’s pretty confusing; shouldn’t we be giving the most attention to the shows we’ll enjoy the most? Why do some shows get high ratings and languish in the proverbial basement popularity-wise while others get abyssmal scores but receive tons of attention? I found a quick and dirty way to dig into this problem using my set of seasonal anime data and got a set of results that was equal parts depressingly predictable and pleasantly surprising.

You can check the full data out here, but if you just want a quick rundown of the extreme ends of the spectrum, here’s your top ten on each end:

There aren’t too many real surprises on either list. The critical list is full of sequels, which makes sense since sequels get fewer viewers and higher ratings on average, so a show that was already high-quality and unpopular will almost always see a higher critical score for season 2. And I don’t think anyone who reads this blog is going to argue that Queen’s Blade or Togainu no Chi are particularly underrated shows.

So, and this is where it gets interesting, which end of the spectrum do you think did better in the marketplace? Trick question: both extremes do fairly poorly, while the middle cleans up: 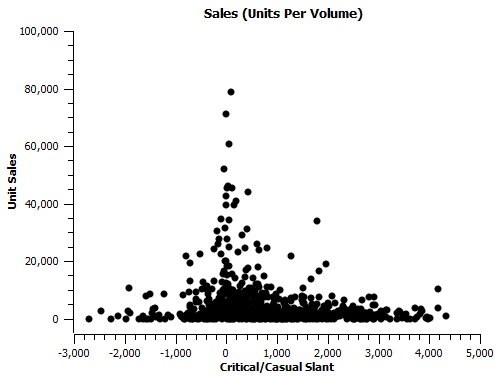 I take one notable piece of information from this data, beyond the fun working with anime-related numbers usually gives me. Contrary to the popular myth, the shows stuffing shallow fanservice into every scene to make up for poor quality do not automatically sell. Though there are examples of that happening, the shows that really sell are well-made shows that bring the level of quality necessary to back up their level of popularity. It’s an encouraging thought.