There’s been plenty of talk, both here and elsewhere, about the difficulty of adapting games and/or how often game adaptations go bad. One of the most oft-cited problems with anime-game adaptations is the pacing, or more specifically how rushed many game adaptations feel. Well, while pacing is a complicated question and slower/faster does not necessarily equal better, we can quantify a basic part of that phenomenon; does a particularly low ratio of anime runtime to game playtime adversely affect the series’ sales?

First, though, it would help to know; what is a typical ratio of anime runtime to game playtime? Between gamefaqs (user-submitted averages) and vndb (ranges of playtimes), I was able to put together a fairly complete list of approximate hours taken to complete the 16 VN and console games adapted into anime in 2011 and 2012 (chosen because I’ve already done some research on those and had them available). I then compared that value for each show to the number of hours (assuming ~20 minutes per episode) allotted to its anime adaptation. For these 16 games, there was an average of 0.13±0.05 minutes of anime for every minute of game playtime, and most series fell within that range (the lowest ratio was Hoshizora e Kakaru Hashi’s 0.04, the highest was Hiiro no Kakera’s 0.21). Turns out, there was a pretty interesting (though it is perhaps just a product of small sample size) relation which fell out of plotting the ratios against another well-known quantity – disk sales averages: 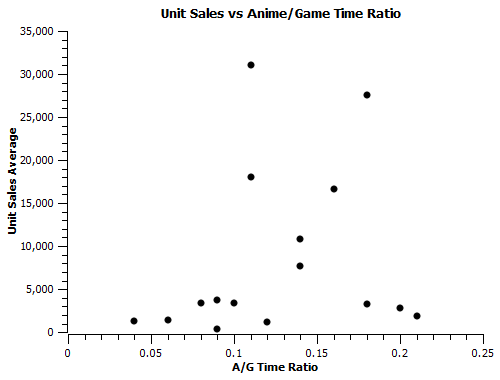 Specifically, it seems that, while there is a lot of variance for any given range of A/G time ratio, there are no 10k+ hits with a ratio lower than 0.1. The sample is small enough that I don’t want to say too much about this at the moment, but if this holds up in other years, it could be a definite point in favor of the argument that game adaptations that face extremely uphill battle in squeezing in content are more likely to fail (or less likely to hit) than those with a little more leeway in terms of allotted airtime.

4 thoughts on “Fun With Numbers: Game Time (in Anime)”