Following up on the impressive (well, to me) discovery that Inu x Boku SS is Square Enix’s top manga, I had another thought. It went something like this; “Well, that anime was pretty darn good, and I know it sold a fair amount of Blu-Rays. I wonder if that has anything to do with how successful the manga is right now?” And so I took to the Oricon rankings, checking for shows from Winter and Spring 2012 that came from manga source material, and looking to see if they experienced a boost in sales. So I put a lot of numbers into a lot of spreadsheets, got distracted by the Saurday anime slate, and made a lot of graphs. If you’ve ever wondered why manga publishers sponsor anime, this should be an entertaining read.

Turns out the boost the Inu x Boku manga was less of a jump and more of a rocket launch. The timeline of events I was able to compile tells a pretty straightforward story of how the pre-anime manga sold a third of what the post-anime manga did.

Note: Volumes 1 & 2 didn’t show up on the charts due to their low sales numbers.

Pretty clear, right? But one case never makes a pattern, so let’s take a look at other series that aired in that same general time period. Fortunately, though Oricon data was lacking for many series, I was able to glean quite a bit from just what was available.

First Week Sales For Other Animes Series With a Source** Manga Winter 2012:

No Oricon Data For:

No Oricon Data For:

-There’s no pre-air data for this manga, so the only thing I can say is that it only showed up on the rankings after the anime happened.

-2 datapoints here, so the results are barely definitive 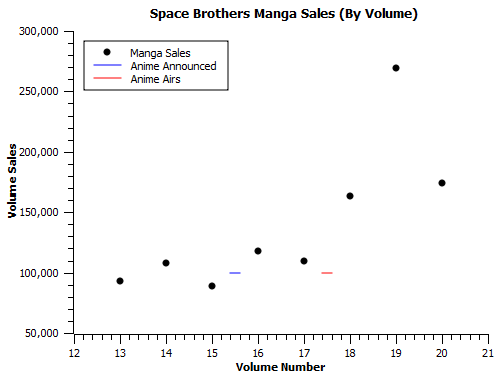 For starters, it’s fairly obvious that, of the shows with sufficient datapoints, Kuroko’s Basketball, Space Brothers, and Thermae Romae got significant sales boosts, while Zetman, Sankarea, and Medaka Box got gains that are somewhere between questionable and nonexistant.

So now I can finally use those damn stats on anime in a manga-related post. Wondering if anything is separating the “winners” getting huge viewership boosts from the “losers” getting jack diddly? Well, as you might expect, the answer has to do with popularity. In all cases where the manga sales took a big jump, the anime had either over 10,000 in unit sales*** (Kuroko’s Basketball, Inu x Boku SS) or TV ratings far above the norm (Thermae Romae on noitaminA, Space Brothers in a sunday-morning block). Meanwhile, the losers each had lackluster*** per-volume unit sales (Sankarea-1488, Medaka Box-756, Zetman-484).

So yes, the making of anime can clearly have a huge effect on a manga’s sales totals, but only if the anime ends up being some kind of popular. In other words, it benefits both the makers of manga and the makers of anime to offer up and target, respectively, manga that can produce big-time anime hits. Likewise, if an anime doesn’t do well commercially, don’t expect the manga sales to make up for it’s crashing and burning.

*I use first week sales rather than total sales because total sales are a) time dependant favoring newer releases and b) not availalbe for most sub-300k volume sales. The major drawback to this method is that some volumes are released in the middle of the week, so some of these numbers (especially those under 100k) may be slight underestimates.

**This is an important distinction because nearly all anime run at least one manga in the months leading up to the release to drum up publicity and maximize their odds of a profit. A manga that launched two months before the anime is not being drawn by the original creator.

5 thoughts on “Fun With Numbers: Inu x Boku SS and Anime As a 20-Minute Manga Commercial”