This is a fairly minor bit of news, but it’s a benchmark that’s at least mildly noteworthy. Kokoro Connect was rereleased as a full 17-episode series in both BD and DVD formats on March 14th, 2017. The TV and OVA series had previously been released in separate collections. This particular collection is noteworthy because the DVD version has thus far gone unranked among products on amazon, indicating there have been zero preorders or purchases of the product. The initial price was the MSRP of $60, but, on the 17th, the price was cut by 33% to $40. On the same day, Amazon began listing that there were 5 copies remaining in stock, and the collection remains unranked. So there you go, one solid example of how much DVDs initially stock on Amazon. It may not be indicative of the overall market as a rerelease, but this minor discovery takes us from 0 datapoints to 1.

I may be able to analyze data in the future and see how typical this is, but there isn’t much point in going back to the past – I don’t currently grab “only X copies left in stock” messages, since they appear inconsistently.

Compared to 2011, 2012 represents an upswing year for the industry; more overall TV anime was being made. In addition to simply seeing more light novel adaptations, we saw several adaptations of finished series (Kotenbu/Hyouka and Chuu2koi) and single novels (Another, Shinsekai Yori). Those four are notable, but not within the LN data I’ve been using for my sample.* Perhaps because of the minor resurgence in the industry, we do see a bit of an increase in the number of series that performed in unexpected ways. The performance of light novels which were adapted in 2012 in relation to the time frame their adaptation aired is charted below. The raw data is on this doc, and can be compared with the 2012 sample for manga.

END_OF_DOCUMENT_TOKEN_TO_BE_REPLACED 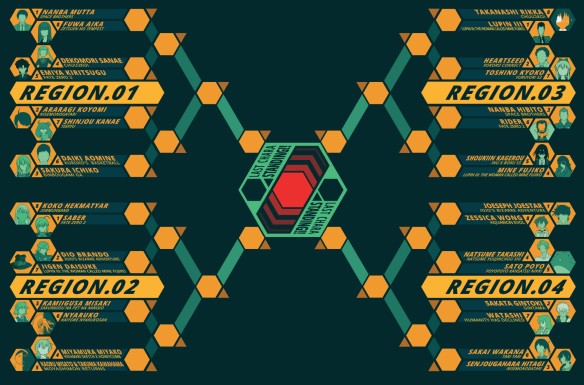 There are times when we at Animetics like to slow down, get serious, and look at the finer points of what defines excellence. This, much like our seasonal anime previews, is not one of those features. There’s no objective way of determining who the best anime character actually is, and we don’t claim to be any more accurate than a series of purely random coin flips. That said, welcome to Charactology 2012, the Animetics bracketology-inspired character polling feature.